How to Progress Faster in Lords Mobile? Lords Mobile is a Strategy game developed and published by IGG.COM. The game offers you a lot of content, which can get overwhelming at times. However, the main aim of Lords Mobile is to upgrade your buildings, train your troops, perform research, and lead your Kingdom to prosperity.

The game offers tons of troop customization options and formations for you to choose from. You can plan your military draft and lineup, counter other troop formations and use your heroes as a coup de grâce against any unsuspecting enemies.

You can participate in real-time live battles with various other players, put your kingdom on the line and participate in Battle Royales, Wonder Wars, Darkness Invasions, and much more. The game features global Leaderboards which you can climb by progressing faster in Lords Mobile. 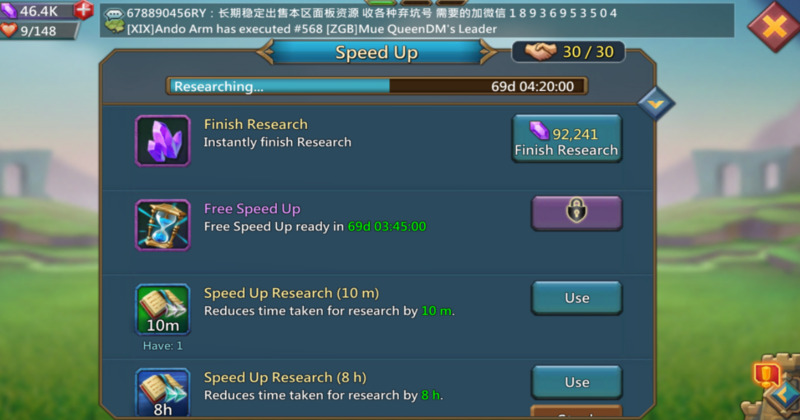 After you get a bit further into the game, invest in training speed after maxing out construction and research speed. Try to max out production first, then get training. Moreover, always upgrade food first and then whatever you need to keep up. Food is the most important as it is the only resource that your troops need.

Do not build a lot of Barracks:

When you wish to progress faster in a game like Lords Mobile, you need to conserve your resources. One mistake many players make is by building many buildings assuming they will increase their overall efficiency. While building barracks generally lets you train troops, more barracks do not equate to training multiple types of troops simultaneously. It only lets you train more troops at one go. So, you should never build more than 2-3 barracks.

If you generally have 2-3 barracks, you can maximize their efficiency by putting them all to work and selecting one type as you can only produce one type of troops at a particular moment. You can then keep rotating types till you have a massive army ready.

Always Set your Troops to Gather: After you have a bit of troops ready to go, make sure that they are always set to gathering. This is an excellent alternative to having your own production. A disadvantage of doing this is that you will always have a weaker base to be attacked at any time as most of your troops will not be out there gathering.

Do note that you do not have to send the entirety of your troops away. You can always keep some in your city or split them and send them to different gathering fields to increase their general efficiency.

Hero Adventure is quests present in Lords Mobile that you can do to level up any particular hero quickly. We recommend that you always clear the furthest possible stage on both normal and elite. By doing this, you get items faster and also get shards for new hero’s if you complete the Adventure in Elite Difficulty.

Shards provide you with bonuses and other strategic edges as well. Sometimes, it makes more sense to get 10 shards for a new hero you do not have rather than 30 for the one you already have as they might have better future uses.

You can complete Hero Adventure pretty fast on normal difficulty in most cases, while Elite might give you some challenge. However, if you do end up completing it on both difficulties, expect to progress really fast as it leads to a great boost in expendable items and shards in your inventory.

Lords Mobile as a game focuses on having you fight as much as you can. While fighting is arguably the most fun part of the game, it can also be extremely detrimental to pick a fight with the wrong person at the wrong time. So, you should always pick and choose your battles.

For example, if you are extremely close to having enough troops to fight with a certain skirmish, do not just attack your neighbor for a few gold coins. Try to finish your skirmish, situate yourself construct new buildings then think about attacking. Remember that Lords Mobile is a strategy game, so you must always think of the best scenario that will suit you in the long run while doing minimal damage. There are two events in the game that run 24/7 in Lords Mobile. Solo and Hell. Solo is a three-hour-long event wherein you need to complete a few particular objectives, while Hell is an hour-long event. The only difference between the two is the general difficulty and rewards.

Hell is much harder than Solo, and it gives you great rewards as well. They also pose a greater risk to your troops and economy, but if you can complete a few of them per week, you can expect your level of progression in Lords Mobile to go up exponentially.

Lords Mobile is currently one of the best strategy games available on Mobile right now. It features tons of formations and attack mechanics while also not being easy for what you need to do before and after an attack. The game grinds players with its lack of direction and a huge variety of options you can pick and choose from.

Due to these expansive options, most players feel lost and distraught and end up blundering and wasting precious time and resources, which hinders their progress. Hopefully, by following these particular tips and avoiding the mistakes mentioned, you should become a high-level player in Lords Mobile in no time! Fix the problem with insufficient storage space in Tower of Fantasy

Tower of Fantasy Best Tips and Tricks You Should Know 2022